Female with “tsundere” characters often appear in Japanese animation, comics, and games. There are also “tsundere" male characters, but there seem to be more women.

The word “Tsundere” began to be used by young people around 2005.

The “tsundere” character females seem to be popular among men for some reason, and some men even want to make such women girlfriends.

What does the word “tsundere" mean?

“Tsundere” is a word that mainly means female (or male) characters and actions.

It represents a state of being aloof, brass, harsh, mean or indifferent.

The word “dere（でれ、デレ）” comes from the adverb “deredere（でれでれ、デレデレ）”.
It refers to a state of relaxed, loosened, or slack.

Each word is exactly the opposite, isn’t it?

From the above, the woman who expresses this word is usually a woman who is cold, indifferent, a little scared, or an enemy. However, something triggered a change in her attitude.
When she becomes alone with a man she likes, suddenly changes, like being a girl, a cat, a baby, becoming fond of him, or starting to take care of him like a wife.

It does not simply mean that the woman was initially an enemy and later became a friend.
It is a character with two sides, “tsun tsun” and “dere dere”.

She really loves the man and wants to “dere dere”, but without the reason, she takes the “tsun tsun” attitude in front of the man.
She always has a pretentious attitude of “tsun tsun” in front of other people, but she shows “dere dere” to certain people.

Why is “tsundere" popular? 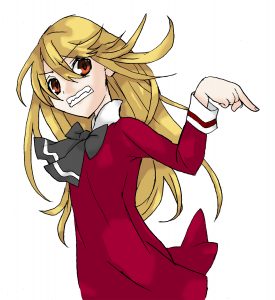 The reason why “tsundere” is so popular is the gap between the two characters.

She shows a “tsn tsun” attitude in front of everyone, but she shows a side that no one else knows just in front of them. Because they can feel the superiority that only they know.

Another reason is that tsundere characters in manga, anime, and games are cute, clever, beautiful and capable, sexy and strong. (Of course!)

“Kimoi” is an abbreviation for “Kimochi ...

What is the meaning of Japanese ARA ARA, Arara? あらあら あらら

As mentioned above, we often hear words ...