In every country and at any time, young people create new words or shorten existing ones. They are usually slang, but the Japanese tend to shorten long words even if they don’t intend to make it a slang.

I think there are many Japanese adults who know the slang, but whether to use it is another issue. They may playfully use it, but not in a decent place.

When I first heard “tehepero（てへぺろ）”, I didn’t want to use it myself, but I thought it was a good expression. I could imagine the scene actually just by hearing it.

Now, what does it mean “tehepero"?

“Tehe-pero" is a word that is used when someone makes a small mistake, which is not crucial and try to make the atmosphere relaxed.

“Tehe（てへ）" is colloquial, and it is often used when someone feels a little embarrassed and try to laugh it off with a mischievous and charming smile, like a little girl.

And “pero" means a state of sticking the tip of a tongue out.

“Pero" is used as follows:

There is an impression that the Japanese consider the following people or situations can use the word.

“Tehepero” can be used in the following situations:

1. The mistake is not important and does not bother other people. The people around you can forgive it.
2. Everyone who says “tehe-pero" is cute or loved.

For this reason, there are many comments on SNS that “feeling irritated to see such a person (as below) uses “tehepero".
It is considered that people who should not use this word if they are:
(but, many people use it casually as a joke.)

1. an adult man (again, however, “tehe-pero” is used by them on SNSs)
2. a person who has made a serious mistake or who continues to make mistakes. (he/she should just apologize properly)
3. a creepy person (because it’s just creepy)
4. a girl who is calculating (as trying to look cute) 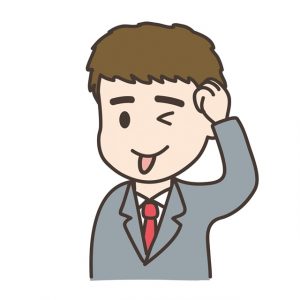 What is the origin of “tehepero"?

It is said that the person who first used “tehe-pero" was Yoko Hikasa, a voice actor in Japan. Originally, she kept saying “tehe-pero" in her blog and in her radio program.

Next, the word started to be used by Japanese comedians in TV programs, and then it was used in TV advertisements, anime, mangas, and so on now.

I will show how to use “tehe-pero", although English-speaking people don’t have many oppertunities to use it.

The followings are considered incorrect usage, but it seems to be OK if you are joking, because it is a joke slang anyway.

What is the meaning of "maji" and its example sentences? マジ
Next

What does mean "tsundere"? ツンデレ?
Prev

What is the meaning of “dekai” in Japanese? When can it be used? でかい