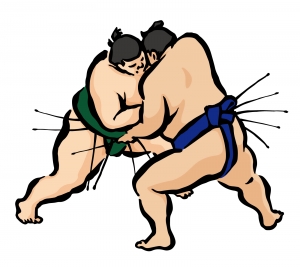 If the Japanese were asked,
“What are the words sumo wrestlers say?" many of them would answer “dosukoi（どすこい）" or “gottuandesu（ごっつあんです）."

But, in fact, many Japanese have rarely heard sumo wrestlers actually say “dosukoi!"

Sumo wrestlers don’t actually say “dosukoi" in sumo matches. They never say the word not only during the match, but also in their daily practice and life. There are no exceptions in the conversations between them, whether formal or casual.

So why did “dosukoi" become one of the words associated with sumo wrestlers?

First of all, “dosukoi" exists in the folk song “sumo jinku（相撲甚句：すもうじんく）" sung by sumo wrestlers. Many Japanese probably don’t know or have heard of this folk song.

This is a folk song that is performed when a sumo match is held in a rural area of ​​Japan, or before a match other than the main tournament. This folk song began to be performed in the latter half of the Edo period.
There is a lyrics “dosukoi" in this folk song.
However, it is said that this “dosukoi" only has the role of giving the song a rhythm, and the word itself has no meaning.

Another theory says that “dosukoi" is a shout when doing something.
Everyone needs to exert a little force when standing up or lifting or pushing heavy objects, right? At that time, the Japanese say “yoisho（よいしょ：ヨイショ）", “dokkoisho（どっこいしょ）", “dokkoi（どっこい）", etc., and “dosukoi" is thought to be a change of “dokkoisho".

In addition, there are some Japanese people who occasionally use “dosukoi" to make fun of other people, which is not so recommended.
As you know, sumo wrestlers are big, right? Those Japanese use the word when they make fun of big people, both men and women. When those big people make some movements, those Japanese people sometimes express “dosukoi".
It’s rude to describe anyone, but it’s not good to say, especially to women.

The other word “Gottsuan desu"

When asked about sumo wrestlers, as mentioned above, the Japanese would answer “dosukoi" or “gottuan desu（ごっつあんです）". Another meaning of “gottuan desu" will also be mentioned here.

The word is used by sumo wrestlers to mainly mean “thank you."
The reason it is referred to as “mainly" is that they use the word in a broader sense than just “thank you."

Originally, the word was derived from the greeting “gochisousa deshita（ご馳走様でした：ごちそうさまでした）" which expresses gratitude for the meal after having finished eating it.
It changed to “gottuan desu" for some reason, perhaps because of a local accent.

The word, which originally had the meaning of gratitude for meals, becomes a general meaning of gratitude（arigatou gozaimasu：ありがとうございます）, meaning the greetings “itadaki masu（いただきます）," which Japanese people say before meals, furthermore, “すみません（sorry）," “失礼します（excuse me）," “さようなら（goodbye）," etc.
In any case, they can just say “gottuan desu" when they don’t know what to say, so it’s simple and easy.

What is the meaning of "dekai" in Japanese? When can it be used? でかい
Next

What is the meaning of "iyo iyo" in Japanese? When can it be used? いよいよ
Prev