Why do the Japanese wear surgical masks in public? マスク？ 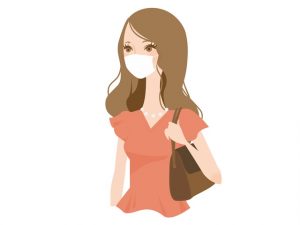 If you visit Japan or see the Japanese people on TV or in magazines, you will notice that many Japanese wear masks in public places such as at school, at work, on trains, or in stores.

They are not studying medicine, they are not going to perform surgery, nor is it a trendy fashion.

What does this mean?

Why do the Japanese wear masks in public?

In Japan, it is a good manner to wear a mask in public when you have a cold.

Do you know that if you cough or sneeze, your infected droplets will fly several meters? Some research found that influenza patients can spread the virus throughout a room with a single sneeze.

It is unclear whether Japanese people know that there are such research results but they think that it is a manner to pay attention to “do not give the virus to the people around" when having a cold and wear a mask for that.
By wearing a mask, they also mean “considering other people”.

Wearing a mask can mean “considering other people"

For example, suppose there are two people who have a cold.
One person (Mr. A) wears a mask, but the other person (Mr. B) does not.
Both are very busy with coughing and sneezing.

In Japan, in such a case, the impressions of the people around them for the two are quite different.

They probably would think of Mr. A, who is wearing a mask, that they are sorry for him having a cold and wish him to get better soon.

On the other hand, they might think this way for Mr. B without a mask.
There must be many people screaming in their heads like;
“Why isn’t he wearing a mask? He’s spreading the virus? Just go to a convenience store and get one!"

No one wants to get a cold from that person. Also, masks are sold everywhere such as at convenience stores and 100-yen shops.

In countries other than Japan, people don’t seem to wear a mask even if they catch a cold. Some people argue that just wearing a mask does not guarantee that they won’t catch or give a cold, because the virus can pass through the mask.

That said, wearing a mask can protect your throat and face from the open air, keep your throat getting dry and keep your face warm.

Japanese often use masks other than having a cold.

Nowadays, many people suffer from hay fever. Masks are also useful in such cases.
A mask prevents contact with cedar pollen, cypress pollen, alder pollen and the like. It is also useful for house dust and when cleaning.

In Asia, the number of people wearing masks is increasing in areas with severe air pollution.

Also, some women may use a mask to hide their faces.
The reasons are that they;

・ don’t want their face, without make-up, to be seen
・ don’t have to put on make-up as the face will hide
・ want to hide dental braces
・ wan to hide acne
・ just want warmth in the face
・ just want to hide the faces

I don’t know if this is a recent psychological trend, but some people are worried about showing their face in public. Such a person seems to feel safe with his/her face hidden.

They are frequently filmed or taken photos by TV programs or gossip magazines. For this reason, masks, deep hats, and sunglasses are often worn to hide their identity.
(If they did it outside of Japan, they would look quite suspicious)

A “da-te” mask to avoid communication? !

Recently, however, an increasing number of young people are wearing masks regardless of the season even though they don’t have a cold nor a hay fever.
This phenomenon is called “Date mask（da-te masuku、伊達マスク）”.

There seems to be this tendency among women, especially young women.
The reason is considered as follows:

At present, a very large number of people use SNSs such as Instagram. Some people try to keep their privacy open to unspecified people by posting photos of themselves wearing masks.

People who frequently use “date mask” seem to be called “mask addiction”. There seems to be an opportunity for this dependency to begin.

For example, it often occurs after a person has been wearing a mask for a while due to a cold or hay fever.
His mask covered almost half of his face for a while.
If he feels better, he should no longer need a mask, but he may feel a little reluctant to expose his face again and may continue to wear it.

One reason for this tendency, especially among young people, is that he doesn’t have confidence in himself or he wants to hide because he doesn’t like his face. A mask can easily hide it.

If he is wearing a mask, he can make excuses for colds and hay fever. And he doesn’t have to show his mental weakness to others, and he can keep his pride.

Masks can also be easily purchased even by children, at convenience stores, 100-yen shops, drug stores, and supermarkets.

Various masks such as aroma-scented masks, colored masks and patterned masks are now on the market, and you can even enjoy using them.
Therefore, it can be said that the fact that there are many opportunities to use masks from a young age is helping this trend.

Some people outside of Japan feel that “there are a lot of people wearing masks in Japan which look weird or creepy”, whereas, many Japanese kind of believe “we are thinking of others”.

I don’t hate masks because I often find them useful.
However, the appearance using a mask does not look so cool.

How to use my points at Rakuten?!
Prev

No related posts yet.